I recently returned from Barcelona, Spain, where I traveled for VMworld 2013 Europe. As usual, I was “traveling heavy” as I call it. Here is my charging station from my hotel room in Barcelona: 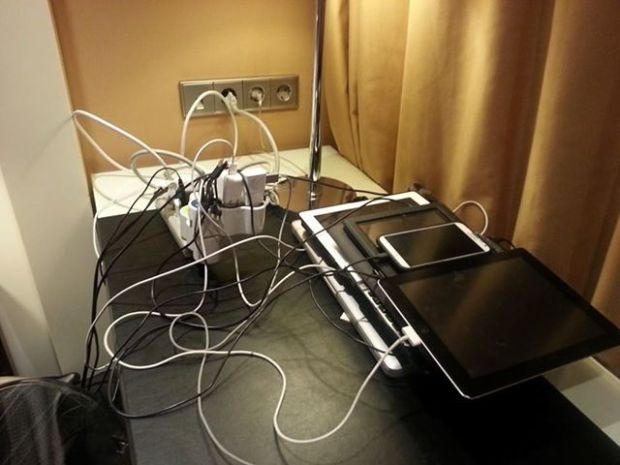 I call this the “Tower of Power”. I am charging six devices here, which include:

That means that I am presently carrying around every relevant platform known to man. Especially considering that I have a variety of Linux distributions running in VMs on both my Mac and Windows box. The question is, with that level of platform exposure, where I use all platforms available everyday, which one is better?

In my opinion, for the kind of work I do, I almost always figure out a way to use the Mac if I am going to be creating content. With VMware Fusion, on my Mac I have been able to create a mobile lab running 5 VMs:

I am told that’s a lot by most folks I show this to. I am able to do this on an 8 GB box because Mac OS is fairly stable and well-behaved, and the underlying mass storage is all SSD. Even when the device swaps a bit, performance is still OK. Thus, I can over commit the memory without a huge issue.

For any type of creative work, definitely the Mac is better. Even for browsing the web, or reading email, I would prefer the Mac over Windows at this point.

Not that I don’t use the Windows laptop. I do, many hours per day. Especially for my corporate Outlook client which still runs better under Windows. Also, things like VPN, IM, and such, especially if they are supported by our IT folks, seem to work a bit more cleanly on the Windows box.

Now, how about the other devices? For the phone, no question, the Droid phones have the edge at this point, at least to me. Certainly, Droid is no less usable than iOS, and it is a lot cheaper. You can get a killer Droid phone for a fraction of the price of an iPhone. And I did. The Note 2 was around $200, and it kills the iPhone 5 that my wife bought (and returned) for $400. I see similar prices right now when I shop online at the AT&T store.

The tablet is similar. I had a platform moment earlier today. I have most of my online e-Books in the Nook marketplace because I started out with a Nook as my first tablet-like device. On the Droid devices, Nook is supported just like any other market. I can purchase books inside the app, no problem. With my iPad, though, when I finish reading the sample of a book I have downloaded, I cannot purchase that book inside the app. Similar restrictions exist for apps which sell music, video, etc.?

Why the Apple restrictions? With Droid invading Apple’s turf with the killer phones and tablets that are now available, Apple has to hold onto market share somehow. The way they are doing that is through jealous protection of the iTunes marketplace.

And therein lies the rub. As a person who prefers an open environment, where all of my personal data is available on all of my devices, Apple’s proprietary strategy definitely hurts my feelings. (Enough that I threw down the iPad in disgust, and went and got my Droid device, so that I could go ahead and complete the purchase inside my app.)

As long as Apple can hold onto enough customers with that kind of stranglehold, they are not going to go out of business anytime soon. Question is: Does that lead to customer loyalty, or (like me) customer annoyance?

So where am I? On my desktop-like platform, I have yet to find anything better than the Apple device I am typing on now. For mobile, I think the tides may be turning against Apple. I wish Apple well, always have. I was a Mac user way back in the 80s and 90s. I think Steve Jobs is one of the greatest humans to have ever graced this planet. Problem is, I have a job to do, and a life to live. My devices need to empower me, not encumber me. I am currently choosing to embrace Droid while I stay on Mac OS for my full-blown desktop. But I am very promiscuous when it comes to platforms, as you can tell.